Girl’s Got Her Combat Boots On 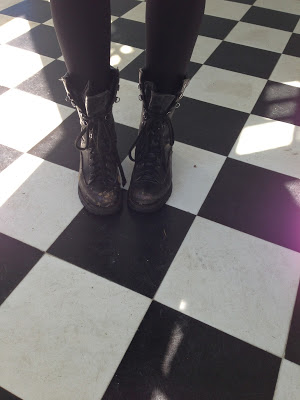 “Put on the whole armor of God,
that you may be able to stand
against the schemes of the devil.”
~Ephesians 6:11

It embodied the path she was walking. Choosing. Taking the light into a dark place.

My good friend who had retired from the Air Force gave them to her the day after Em read the verse.

And she has worn the boots into lots of dark places ever since. Playing music with her best friend/husband in bars. Praying with a roomful of models and walking runways. Boldly blasting churchy paradigms and teaching this woman a few new lessons about being salt and light.

You should see how people look at her. This girl with crazy, dread-like curls, dressed however the fancy grabbed her that day, and big, black combat boots. Ready to take on the world and kick some butt in its defense.

She’s worn those boots into some of her own dimly lit places as well. Fighting for the truth of her own and every woman’s beauty as she battled an eating disorder. She’s turning that fight into a victory for herself and other girls and women thru her new ministry “Beauty Files.”

The only sister smack between five brothers, God has a purpose for everything. She’s tough but knows how to love her family and now her husband with an incredible passion and tenderness.

But even tough can break. And a week ago she broke harder than I’ve ever seen. My heart broke right along with hers.

Em and Ethan love family and decided to jump right in to having their own. Just a few weeks after their honeymoon the lines showed up on the stick, and they went straight from “newlywed” status to singing their little one songs to sleep in utero.

But a few weeks later she complained of cramps. Then bleeding. And my heart sank as Ethan called to describe what I knew was most likely the beginning of a miscarriage.

I’ve been in my share of emergency rooms. With an active family and two preemies that spent weeks in the NICU, I’ve heard hard news, faced scary possibilities, and spent hours in waiting rooms. So when I walked into the ER to meet Em and Ethan, I didn’t expect what happened.

The room was empty. She was still in ultrasound. When I saw her purse and clothes and her delicate lace “wedding” Toms folded neatly in the corner, my heart caught in my throat. And sobs from somewhere deep threatened to explode.

“Hold it together. You’ve done this before!”

But no. Immediately, I knew this was different. I’d been a momma in the ER, but she never had. I’d faced threats of illness, pain, loss, but she hadn’t. Not like this. Her own, yes. But not the loss of someone she’d fallen head over heels in love with the moment she first became conscious of their existence.

She was the momma now. And I was initiated into yet another realm of motherhood I never knew existed.

A few minutes later, Ethan and the nurse ushered my daughter into the room. She smiled bravely at me and got back into the bed. I kissed her head, and we both wiped tears.

We cried together for the next four days. I’d hold and comfort her as she wept. Then when she’d leave, I would go to my bed and do the same.

On Friday, I took her to another follow-up appointment. She was stronger, happier, and one of the first things I noticed when I saw her was “Girl’s got her combat boots on.”

And I knew she was back in the fight.

We grabbed coffee after her appointment. She talked about her plans . . the one’s in process already and those for the future. Peace and enthusiasm colored all her words.

After coffee, I took her to one of my favorite gardens at a local museum.

You should have seen how the little old lady at the info desk checked her out. Wild hair, mini skirt, black tights and those boots. Em smiled sweeter than southern ice tea and tromped away.

She had beauty to discover and battles to fight.

Join the Winsome Living community to receive encouragement delivered to your inbox as well as updates on upcoming retreats.

You have Successfully Subscribed!